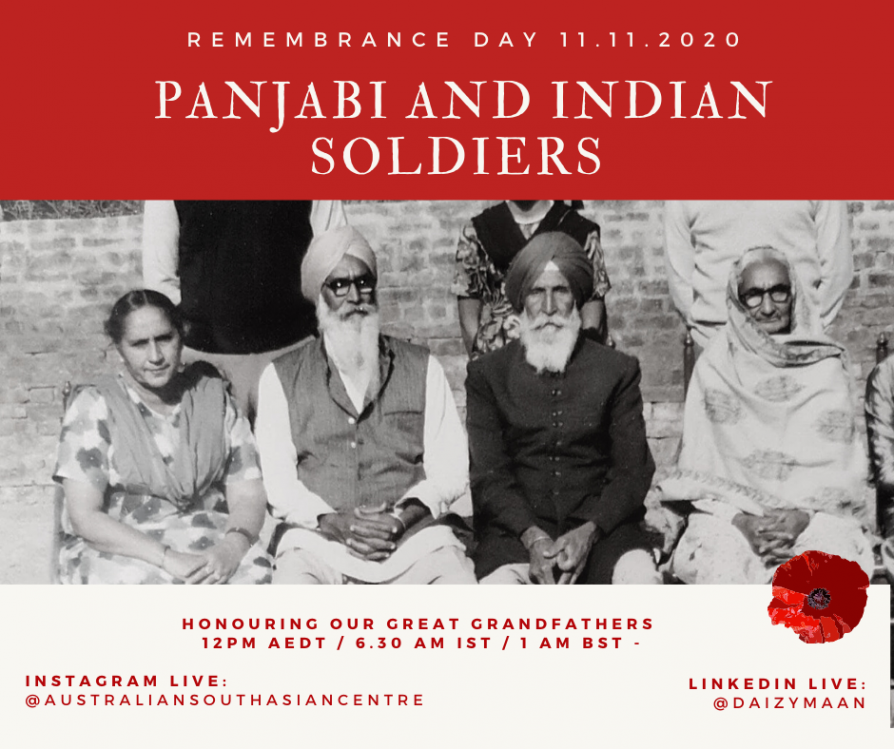 Tomorrow is Remembrance Day and I want to pay tribute to our Sikh & Panjabi great grandfathers who served time for the British empire that colonised them. My great grandfather Sardar Chajja Singh Mann (Ludhiana district) was a signalman in WW1 and during WW2 he was a Sikh priest (Giani) at the cantonments.

Over 1.3 million Indian soldiers fought and 74 000 lost their life for their colonisers. One in every five soldiers during WW1 was Indian and half of those were Panjabi – known to be fierce and courageous. Their stories, and their heroism, have long been omitted from popular Australian / British histories of the war.

Not one Remembrance Day growing up in Australia did I see a Panjabi man and my history was erased in textbooks and in national tributes – with all the heroes being predominately British / Australian. We must take a nuanced perspective on war – acknowledging the diversity of men that fought.

Some young men did not fight out of loyalty to the empire or nationalistic agendas, but because they wanted a better life for their families. But that does not diminish their sacrifice and their warrior spirit.

Their sacrifice is one for us. For their own livelihood and for their children and their children (our parents) and ultimately us. Tomorrow I’ll go live alongside BBC radio host Shay Grewal to pay tribute through having a conversation about the Panjabi and Indian soldiers who fought in WW1.

We’ll have a conversation about the Sikh, Indian and Panjabi soldiers who served. Below photo is my grandmother, grandfather, great grandfather and great grandmother in Mangewal. Join us at 12.00pm (AEDT).
Join me on Instagram https://www.instagram.com/australiansouthasiancentre/
or on Linkedin/Facebook:  https://www.linkedin.com/in/daizymaan/

I’m fundraising for a monument / statue to be built in Melbourne that honours our great grandfathers (who served in the army) and our grandmothers who spent many years alone raising our grandparents, I have recently met a dear friend who has made many of the statues and will be working with her to bring this to life as well as contacting City Of Melbourne.

If you would like to help pledge some funds towards this you can do so here or below.