There’s this clip on YouTube from 1994 that shows Tobacco Company CEO’s testify before Congress on whether nicotine is addictive. All the evidence presenting that it is clearly addictive lies in front of them on their desk.

One by one each of the global heads of tobacco companies answer “I do not believe nicotine is addictive”. All 7 of them.

A phenomenal speaker I had the opportunity to listen to told this story, he paused the video and said “I decided to look into these 7 people”.

Throughout childhood we don’t naturally tell lies to a degree of such harm to others. Yet at what point does someone reach a stage that despite overwhelming evidence they persistently deny the truth for greed? Even at the cost of human lives? At what very moment do they become this person?
It turns out almost all 7 went to Ivy League school in the US — the likes of Harvard, Stanford etc. What shook me to my core was this.

One of them during college was even voted by his peers to be the most likely to influence the world in a positive way.
So what’s the answer? When?

Well it’s not a moment in time, but it’s small decisions one by one, sometimes incentivised by the corporates we work for, that ultimate make us the person we become. 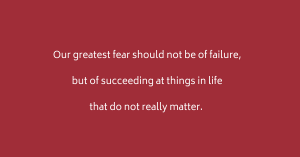