We took university students on a tour of Melbourne’s booming startup ecosystem visiting Envato, Blackbird Ventures and Google for Startups. 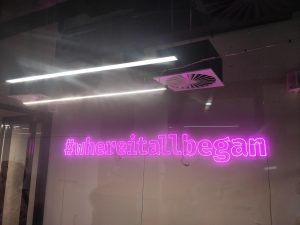 Last week I was invited to deliver a guest lecture to about 400~ university students during their first couple of weeks in an Entrepreneurship unit. I asked ‘how many of you know what an incubator or accelerator is’.

Five hands went up. This used to surprise me, it doesn’t anymore. Despite living in the startup bubble myself, I now understand for most people accelerators and incubators are a relatively new phenomena. Two of the world’s most well known accelerators — Y Combinator and Techstars were founded in 2005/2006 but accelerators in Australia are even younger — Blackbird backed StartMate was announced in 2011 and the oldest university based accelerators University of Sydney’s Incubate and Melbourne University’s Melbourne Accelerator Program launched in 2012.

The WHY
Sometimes those in the startup bubble (like me) forget that the majority of students still don’t know much about the startup space — the opportunities available, the community events, the fantastic scaleups like Envato who are hiring (they’ve got 35 current job oppportunities open on their website at the time I’m writing this). LaunchVic, the Victorian Government’s startup agency intiaited a new campaign recently called “Scaleup your career’ after their research revealed that scaleups (rapidly growing businesses) are struggling to find local talent and graduates aren’t aware scaleups are hiring because they don’t know about them.

Lately at SPARK Deakin we’ve been experimenting with what else can we do to ignite the curiosity around entrepreneurship and be the bridge that connects the startups & scaleups to university students. We want students to explore entrepreneurship as a genuine career path and connect with the wonderful world of startups. Most importantly our work needs to be done in a way students relate to and can understand — injected into the current system so they understand what it is plus making it more inclusive.
After coming across multiple ‘pub crawl’ posters, a common activity organised by clubs & societies on campus especially during Orientation Week we had a little light bulb moment. We were goign to take students on a trip across Melbourne’s startup ecosystem instead of pubs! That was our O week offering, join us and immerse yourelf in this exciting rapidly growing space.

With about 2 weeks to plan we got in touch with our friends across the startup ecosystem who generously (in true Melbourne spirit) agreed to come on board.

Here’s how the day went down. We kicked off at Downtown Deakin where Kaylene Langford spoke about her business journey in setting up Startup Creative, launching her magazine and how she huslted to get it stocked in Virgin lounges.

Given Instagram was down, Kaylene ever so slightly concerned about her 65k+ followers stayed around to hear our next speaker — Glen Messenger from Google hoping he’d have some insights.

Google for Startups
Glen had a fantastic presentation on Google’s entrepreneurial culture and Google for Startups (a program we’ve joined recently) and answered many questions about his own startup, finding founders and everything except his insider knowledge on Instagram’s black out.

Though we did end the session with a quiz on Google, it turns out Google rents goats instead of lawn mowers in some of their locations….

Investment and Fundraising: Venture Capital
Next we heard from Mason Yates from Blackbird (a $454m fund) who spoke about Venture Capital and the options available to startups when it comes to fundraising. He talked about the exciting investements Blackbird has made in companies like Zoox who are working on autonomous vehicles. One our students later asked me ‘Why is the bird pink when it’s Blackbird?” I commended him for not only listening but his attention to detail.

After lunch we headed outside in the rare Melbourne sunshine to witness the full glory while the folks at Unbound hosted a creativity workshop.

LaunchVic — Government Shaping the Ecosystem
Our next stop was Victorian Innovation Hub where we heard about how the government is helping startups through LaunchVic (a $60m initiative funding ecosystem growth), Josh Lipscombe gave us a glimpse into Melbourne’s startup ecosystem and his side invovlment in Fuc* Up Nights — a fantastic event where people get together and share their business failure stories. He also shared their latest campaign on matching graduates and talent to jobs in the booming scaleup space.
Cyber Security and Agtech Accelerators

Kirstin McIntosh talked to students about Cyrise — a new cyber security accelerator funding early stage startups launched by Dimenson Data and Deakin University. She also shared her tips on working with different people — traditional executives in IT to startup founders and how to adapt communication depending on who you’re speaking with. Julia Waite from SproutX taught students about the #agtech space and how SproutX is funding startups in the agricultural startups that improve various steps from farm to table, we were left with food for thought about their investment in insects as food — a growing trend.

Australia’s Best Place to Work — Envato
Most students hadn’t heard of Envato — voted for 5 years in a row as the best place to work. We headed to the HQ on King Street and the fabulous Jo Miller — People Partner (tech) led a panel discussion with Nicole Simona — OD Manager, Elizabeth Enders — (Talent & Brand Manager) & Jimmy Joslin — (Product Manager) talking about their roles and what it is like to work at Envato. Envato is funded on the idea of community.

The company is one of Melbourne’s home grown unicorns never having raised external capital with products like Theme Forrest and has over 600 employees. The culture is everything at Envato and they hire “smart people who are nice too”, except it hasn’t always been easy to changing the culture so that working from home became normal. In the early days Envato put blow up dolls in meetings to help people remember that there are other people in the meeting via phone who aren’t physically there but need to be included in the conversation. Envato made headlines in SmartCompany when thier founders announced they would share their profits with employees. Safe to say almost everyone now wants to work at Envato.
Impact Investment & Social Enterprise — doing good & making money
Next up was a panel discussion on Impact Investment where Charlie Macdonald from Impact Investment Group and Max Lynam from isgood.ai talked about impact investing, social enterprise and impact measurement.

Drinks — una cerveza por favor.
We then headed to Navanti’s sleek new space on Collins — the 11th. Ivan Tandyo (CEO of Navanti) generously shouted our crew drinks and shared the exciting work they’re up to investing in startups and more traditional businesses.

Yes we even had a flag

Thank you to our partners who made this event possible, and to my wonderful collegue Ayush Jain for bringing it together. If you’re keen to join our next one — jump on the SPARK Deakin mailing list and we’ll let you know.